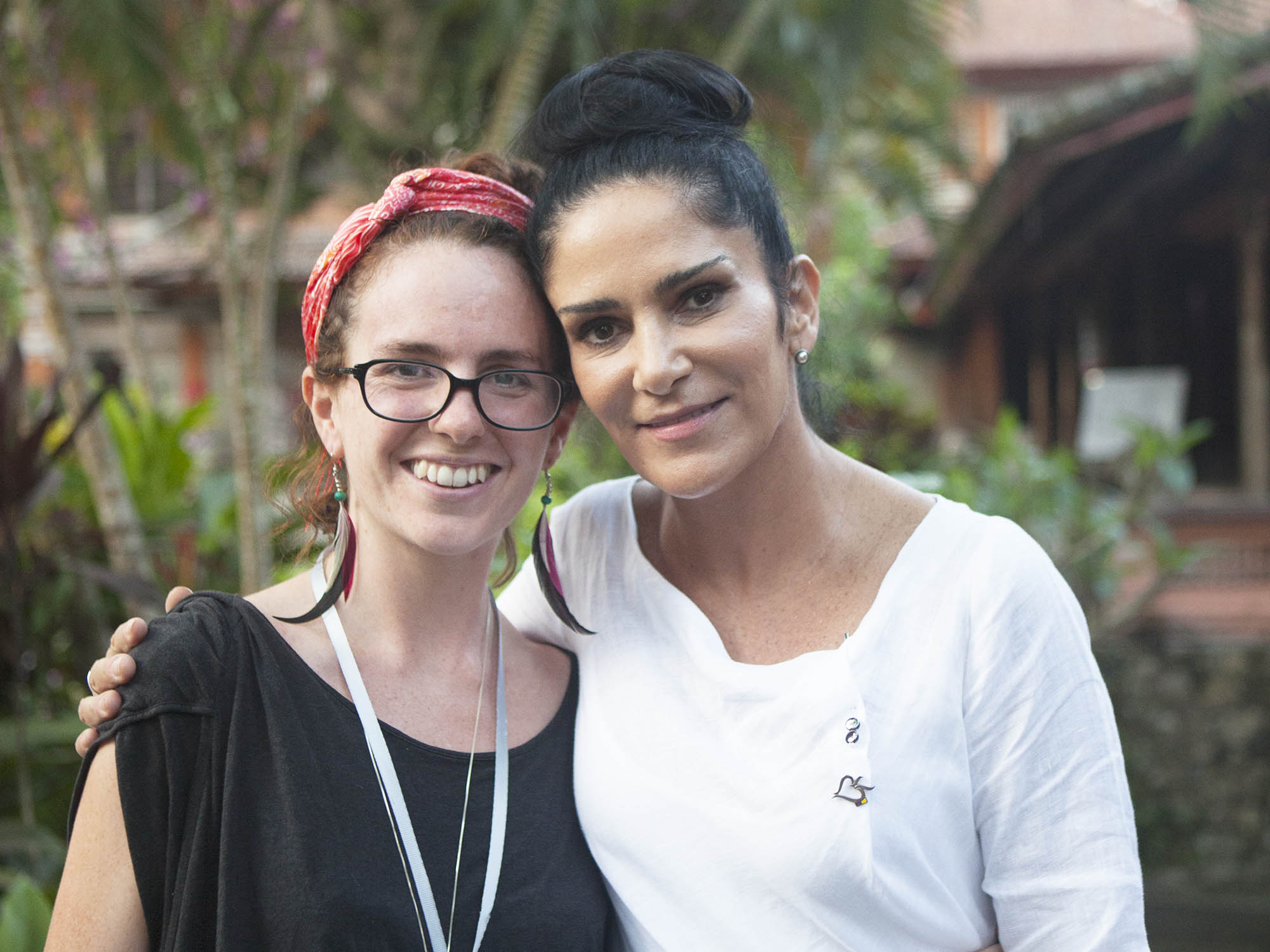 Outside of Bridges and Balloons, I also freelance as a writer and editor. This is an interview I had published in Oh Comely magazine with one of my heros, Lydia Cacho, a leading investigative journalist and women’s rights campaigner in Mexico.

“I’ve escaped mafias and now it’s a monkey that finally got me.” With a laugh, Lydia Cacho is showing me her bite from Ubud’s monkey forest. The little thugs are notorious for terrorizing the tourists in Bali, and yesterday they got Cacho, one of Mexico’s most fearless journalists and human rights activists. She’s in town for the Ubud Writers and Readers Festival to share stories about her 23 years as an investigative reporter in Mexico, one of the world’s most dangerous countries for journalists.

Cacho started her career reporting on violence against women, and has gained renown for her work exposing human trafficking, child pornography, and prostitution. Her first book, Demons of Eden, uncovered a paedophile ring in Cancun, which led to the sentencing of local hotel owner Jean Succar Kuri. It also led to Cacho’s own torture and arrest for defamation – an event that was later revealed as part of an alleged plot to silence her.

Despite these threats to her safety, Cacho carries on. She deals with frequent death threats, some of which have forced her to flee Mexico, but she always finds a way back. Her latest book Slavery Inc.: The Untold Story of International Sex Trafficking, follows the trail of traffickers and their victims from Mexico to Turkey, Thailand to Iraq, Georgia to Britain.

Perhaps the most surprising of all is her humility and joie d’vivre amid this. Her enjoyment of life shines as intently as her passion to face and fight its difficulties. It’s one of the many things I’m curious to ask her about when we finally meet in Ubud.

Over the past few days, I’ve heard a lot about the threats to your life. Have they stopped now?

They don’t stop. Slavery Inc has been translated into so many languages so now they are even angrier. Every now and then they send messages to me. The Argentinian man I wrote about is going to be tried soon. It’s because of the book and he’s furious at me. So I am really, really careful. I have become an expert in that.

You’ve talked before about the need for a masculine revolution. Do you see that happening?

Yes, I hope it happens. We would need a generation of parents – fathers and mothers – to do it.  I see my nephews and nieces and their friends evolving into something different in many ways. Some of these kids are learning different ways to be men. They don’t have to be so tough or to prove themselves, or to be the sole breadwinner. I think things are changing little by little. But on the other hand, we have this huge wave of sexism and machismo coming back at us. Some journalists were explaining to me yesterday about this new law in Indonesia where 13-year-old girls have to prove they’re virgins before going to school. This kind of thing is hard. You think you’re getting somewhere and then they come along with something else. I hope this masculine revolution can happen, but we need more men to be involved. It’s not our job as women.

You have so many encounters with the people you advocate for. Yet there must be some that have a special significance.

Most of them happen with children. This is strange because when I first started as an activist, I said “I’m going to dedicate my activism to women. I’m not going to be worrying about the children and everything else. This is not my area”. Now I understand better that these children are women and men in the making.

It has to do with the fact that they can be happy even though they went through hell – for example children who have been abused for child pornography, which is so awful. What amazes me is their ability to trust adults.  Their mother or father probably sold them or let them go with these guys, but they will trust again and again. In general, that is one of the things that I have learned. People may hurt you but you just have to keep going. It’s sounds simple, but it’s not at all.

What drives your human rights work?

I could say my convictions but it’s also the way I have been ever since I was a little girl. I was such a “rebel girl” – that’s what my father calls me. I believe deeply in women’s rights and human rights in general – not only as a philosophical issue but also as a personal issue. It has to do with your dignity.

Also, growing up as a woman in Mexico, where there is so much machismo and sexism, you learn how to defend yourself and how to have arguments for everything. You learn to be opinionated and how to have an opinion. When I was young and angry about something, my Mum would say to me: “You’re angry and that’s alright, but I need you to to give me an argument. Explain to me why you’re angry.” She did that all the time.

I read somewhere that you said: “I don’t scare easily”. That’s quite obvious from your persistence, but have you always been like that?

Yes. I’m not easily scared. Of course, I’ve been afraid in different situations but when I’m afraid I’m not frozen as some people are.

You’ve also said you meditate every day. Does that help?

Yes it does. That’s very important. I started doing yoga more than 20 years ago, and then when my work as a journalist became quite dangerous I discovered it was so useful. It grounds me again and again every day. It also helps me put things into perspective. I’ve been thinking about that a lot here in Bali because of all these questions about how brave I am, and if I’m a heroine. I think maybe what makes me strong is the fact that I’ve always believed – and because of meditation I know – that I am just a small part of the whole thing. I’m all the women and I’m one woman.

When I interview children I’m able to contact my inner child and that’s why they trust me. I know how not to hurt them. I can connect with them and I guess that’s made me more compassionate – to myself too, so I can be happy and take care of myself and pamper myself. I am not an angry hero or an angry feminist. I don’t waste my time with those things.

I find your sense of focus and balance remarkable. Have you always maintained that?

No, no, of course not (laughing). I’ve been lucky in that all my love partners (my actual partner and the two other partners who lasted a long time) have been good men in general. They haven’t been able to understand my fame and power, but that’s pretty much the case with all men all over the world.

It’s so important and valuable to recognize the networks we build around us. I have seen really good journalists who are solitary – for example war reporters who go there and become really cynical. I don’t admire them even though they have taken bullets and come back home as heroes. They keep being unattached and I don’t think that’s life worth living. A loving experience is really, really important to me – in a partner and with my friends and sisters and brothers. I have three brothers and two sisters. We are a big family, a Mexican cliché. We get together and it’s always like a party.

It must be difficult to switch off from work

As it is for everyone. I cry a lot, I drink some tequila, I dance salsa, I have sex – basically I enjoy life.

I live in the jungle away from the city, just ten minutes from the ocean. Sometimes after I’ve finished working at night, I go there and swim a little before returning home to cook dinner and watch a movie. I do it on purpose because if you don’t do it, you make your life miserable. I am very disciplined about enjoying life.

3 thoughts on “Lydia Cacho: Children are men and women in the making”