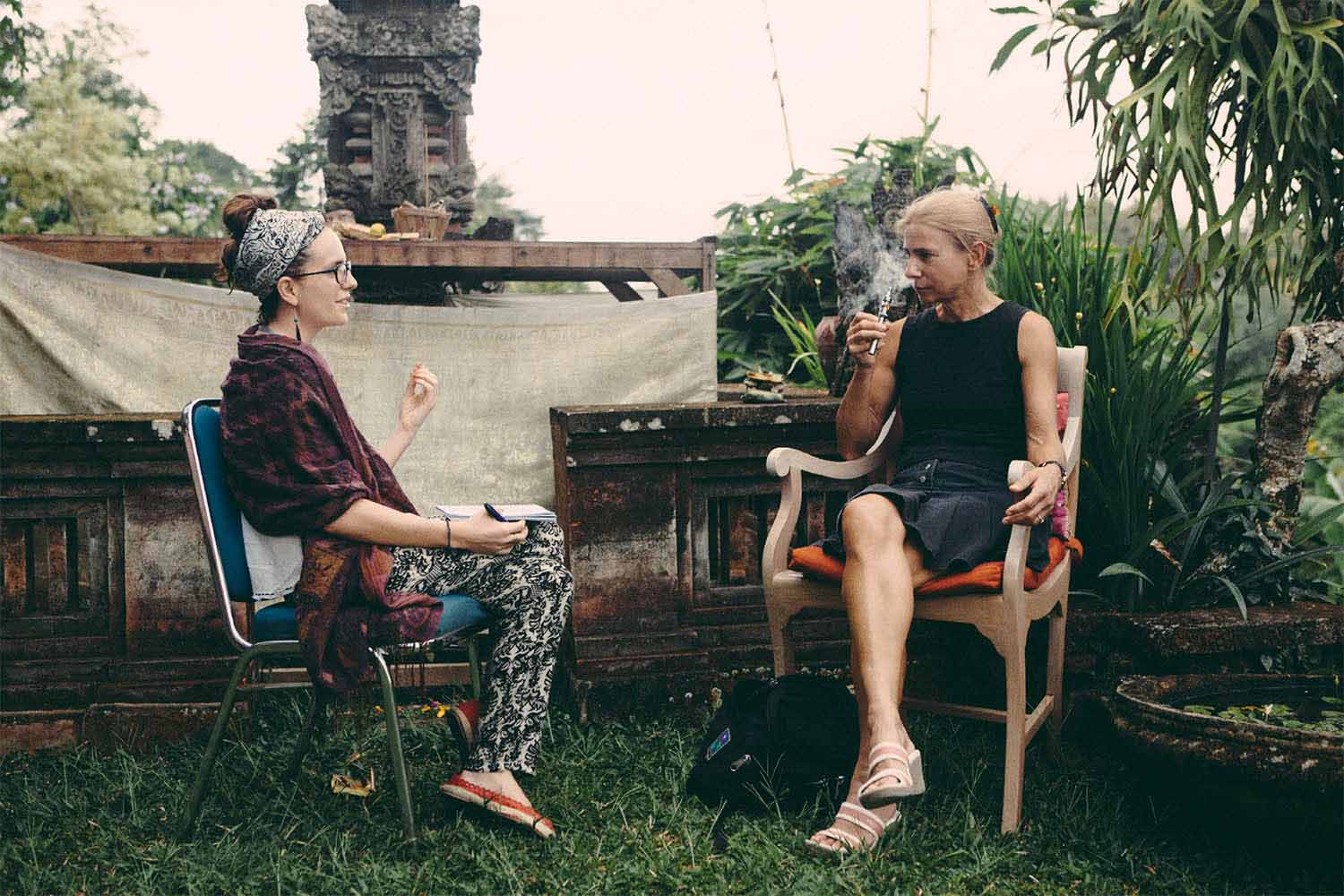 Outside of this blog, I also freelance as a writer and editor. One of my favourite things is interviewing people and Lionel Shriver has been a highlight. This is a piece I wrote that was published in Oh Comely magazine.

“I’m willful and regimented and I don’t quite trust myself so I have rules that I follow.” These were the words that announced Lionel Shriver’s talk at the Ubud Writers and Readers Festival in Bali. It encapsulates her image as a strict, somewhat frightening woman, famous not only for her macabre novels but also her personal routine. She eats only one meal a day and exercises for around two hours. It’s rare to see a photo of her smiling, and interviewers repeatedly favour the word ‘stern’ to describe her. So when I was offered the opportunity to speak with Shriver, I met the prospect with curiosity, and a dose of fear. She certainly didn’t sound easy.

I had attended her public talks at the festival–an event that had turned my temporary home of hippy Ubud into a tropical playground for the literati. Immediately, an omission from every interview I had read was obvious. Shriver wasn’t so much stern as she was mischievous, offering even the strongest of her opinions with a cheeky glance towards the audience, ever aware of the pot she was stirring. “What makes you angry?” asked the interviewer, to which she quickly replied in a dry monotone, “Everything. Can’t you tell? I’m into serial fury. I pick something to be mad about and then I write a book, and then I pick something else. Right now I’m mad about economics. I love to be outraged.”

Before economics, Shriver was mad about obesity, the subject of her latest novel, Big Brother. Her own brother, Greg, had died from complications of obesity in 2009. The inspiration for the novel was a moment in hospital where she found out her brother could be a candidate for gastric bypass surgery, so long as there was someone to look after him in New York.

“I had this image flash through my head,” she said, speaking with honesty and tenderness. “My husband and I have a house in Brooklyn, and I have a very mobile life. I had to ask myself, ‘Is this what I’m being called to do?’ And actually my heart fell, because I wasn’t sure I was up for it. My brother may have been a genius but he was also very difficult.” Two days later she got a call to say her brother had died. “So I got out of it. And I never really had to answer the question as to whether or not I would be willing to make that kind of sacrifice on my older brother’s behalf. That’s where the book comes from. It’s asking, and trying to answer, that question.”

I met Shriver later that day in the gardens of the festival grounds. She looked spritely and relaxed as she puffed on an elaborate e-cigarette and carefully pondered each question. I asked her if writing Big Brother had been a catharsis for getting over any guilt surrounding Greg’s death.

“I think guilt is the wrong word,” she said. “I’m more realistic than that. I don’t believe I could control what my brother ate, and there were a lot of other tragic sides to his life that were either accidents or he brought on himself, and I couldn’t control those either. What I feel is sorrow. He was a fine person, he was brilliant, and it upsets me the way he ended up and that he died so young, but I don’t feel that’s my responsibility.”

Shriver’s vulnerability, coupled with the glint in her eye and the sight of what had seemed an absent smile, made her stock characterisation seem misleading. “This whole ‘scary’ thing is ridiculous,” she agreed. “I’ve been more than surprised. And it’s not only scary, it’s also ‘stern’. This is a word that keeps following me around the world and I don’t understand it. You’d think I was snapping journalists’ heads off all the time. I’m just making them tea.”

One topic I knew not to push was her personal routine, in particular her exercise and sleeping habits (she goes to bed around 3 am and wakes at 11 am). Questioned on it the night before, she had declared the topic dull and complained: “This is what gets done to writers: it’s not enough that we write interesting books, we have to be performing bears. You have to pull out things about your life that make you so fascinating, and actually there’s nothing fascinating about my schedule.” Her exasperation gave a glimpse of why the word stern is sometimes chosen to describe her.

But Shriver’s discipline is interesting because it’s something so many of us find difficult. It is also freighted with contradictions: she bemoans that we live in an era that “idolises housekeeping of the body,” but she herself maintains time-consuming routines in the pursuit of health and has written a book that highlights the dangers of obesity. All of this felt especially pertinent in Ubud, a place famous for its alternative health scene. The town is filled with health devotees from around the world who define themselves by their diet. Having reached my own saturation point with health evangelism, I suspected Shriver would also find it quite trying.

Her stance was simply, she explained, a push against the way our culture is tediously absorbed in contempation of our own bodies: “I tend to push the other way, especially in public events. But in my personal life, I made the determination a long time ago that I was going to give the maintenance of ‘my little house’ time and effort. It makes me feel better in every way. It gives me energy more than costs me energy. I don’t regard that as some kind of moral achievement, it’s just a little tidiness.”

Not an easy path

Lionel has twelve novels to her name and awards including the Orange Prize, but it hasn’t been an easy path. She was published six times before having any notable success and was close to calling it quits when We Need to Talk About Kevin finally won her that coveted fame–a reward that surprised her with its flatness: “Having the kind of profile that I’ve always coveted is a much milder emotional experience than I had anticipated. This whole thing of having arrived somewhere and getting something is bafflingly quiet and even a little disturbing, because it doesn’t have that natural forward movement of striving for something that you want.

“The only way that I know to deal with that is to resort to the nature of the profession itself. With every single book, you’re sent back to ‘Go’, and you can strive your little heart out. I think, if anything, writing books gets harder and if it’s not getting harder, you’re not paying attention and you’re starting to manufacture the same thing over and over again. It becomes more and more challenging and that rescues me from any self-satisfaction and stasis.”

This echoes Shriver’s comments from the night before that one of the happiest times of her life was when she was a struggling writer in Belfast, a city she called home for twelve years before moving to London where she still lives with her jazz musician husband. I wonder what happiness means to her.

“Happiness is not a static state. We’ve misconceived of it completely. We think that there is some little oasis waiting where you sit around dabbling your feet in the pond sipping piña coladas. That is not happiness. It is getting up in the morning and not having enough time to do everything, having too many emails, and something in the day that excites you and you don’t know what’s going to happen. It’s about uncertainty, engagement, direction and motion, and it is not standing still. That is a whole Western problem–how we talk about the H-word. We think it is some sort of position we can achieve. It is not a position, it is a trajectory.”

And as Shriver sits in front of me, toned and tanned, and surrounded by tropical gardens, she looks like her trajectory is suiting her well. In so far as ‘stern’ means opinionated, she is certainly that, but if you take the definition ‘of an unpleasantly serious character’, it’s a description that doesn’t fit. However, so long as Shriver continues to tackle the topics she does and create such complex characters, she is likely to tickle the rage of her critics. As she said herself: “I was bad as a kid and I’m still bad as a grown-up. I don’t consciously go seeking to offend people, but I am interested in whatever it is that we’re not admitting to, in what we don’t say. I think despite our confessional culture and the fact we can now say ‘fuck’ in public, we’re hiding as much as we ever did. And that’s where fiction is useful.”

This piece was first published in Oh Comely magazine.

2 thoughts on “Lionel Shriver interview: I pick something to be outraged about and then I write a book”